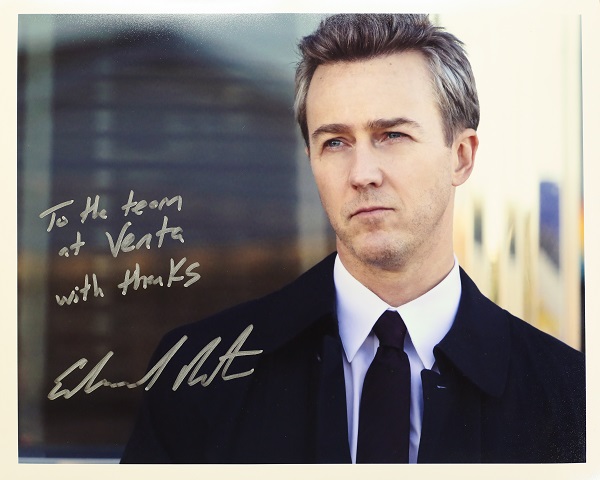 Acclaimed actor and environmental activist Edward Norton graciously shares his thoughts on his humidifiers with the Venta Team.

In 1996 Edward Norton burst onto the Hollywood scene with his Academy Award-nominated performance in Primal Fear. Since then he has been nominated for two other Oscars (American History X, Birdman), starred in a number of critically and commercially successful films, established himself as a director, writer, and found time to promote environmental causes like renewable energy. Mr. Norton graciously shared his thoughts about how much he is enjoying his two new Venta Humidifiers:

“A quick note to thank you and the whole Venta team for the very generous gift of these two humidifiers. They were incredibly easy to set up and get working and I’m impressed with the cleverness and sophistication behind the simplicity of how they work. Though I haven’t dealt with cleaning the discs yet, it’s fantastic to not have to deal with filters and that sort of stuff.  If you have a suggestion as to the best way to clean the disc wheels easily, let us know… But really just wanted to say thank you for this very nice surprise…our family and my many guitars all thank you sincerely.

As a company that is committed to choosing environmentally friendly practices, Team Venta is incredibly grateful to have received these kind words from Mr. Norton, who is also passionate about environmental causes and renewable energy. Over the years he has been involved in several projects including the Solar Neighbor Program, National Geographic’s “Strange Days on Planet Earth,” and the Green Communities Initiative.

We appreciate the work Mr. Norton has done to promote environmentally conscious practices around the world and are proud to have him as part of our Venta Family.