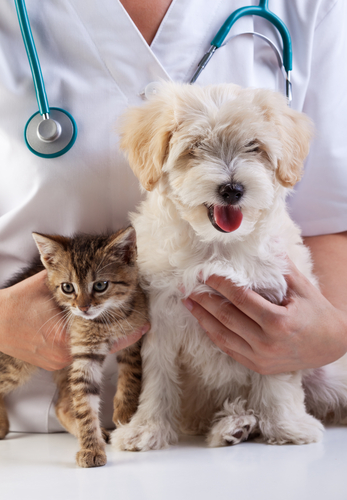 A runny nose, itchy eyes, and dry skin: When allergy season hits, it’s not only humans that suffer the nagging symptoms that mold, dust, and pollen bring.

Dogs, in fact, have the same allergies and symptoms we do according to veterinary dermatologist Dr. Heather Peikes.

An allergy to environmental antigens, a.k.a atopic dermatitis, is a chronic skin disease that has no cure but can be treated. In an interview with ABC News, Peikes explained the approach to caring for pet allergies is similar to human treatment, as allergy testing, shots, air purifiers, and antihistamines for animals are available.

According to the American Society for the Prevention of Cruelty to Animals (ASPCA), dogs with allergies can move from symptoms like increased scratching and constant paw chewing to “secondary bacterial or yeast skin infections, which may cause hair loss, scabs or crusts on the skin.”

After your pet is diagnosed and treatment is underway, the ASPCA suggests keeping exposure to allergens at bay by washing linens and bedding, vacuuming, and dusting at least once a week. If you are riddled with allergies, this regimen will sound all too familiar. Weekly bathing and washing of paws after exposure to outdoor allergens will remove particles from the skin and prevent allergic outbreaks.

A 2007 study published in the Journal of the American Veterinary Medical Association found the presence of Stachybotrys chartarum, also known as toxic black mold, in two Himalayan cats. Co-author of the study, Douglas Mader, DVM, of Marathon Veterinary Hospital in Florida, found frothy blood in the endotracheal tubes of the cats during a routine dental cleaning, which leads to the discovery of the toxic mold. The procedure was stopped, and shortly after, and one of the cats lost its life due to bleeding of the lungs and upper respiratory tract. According to Mader, this result just doesn’t add up. “The circumstances of these cases are just not heard of,” Mader says. “Anesthesia doesn’t cause pulmonary hemorrhage.”

He stated this type of mold found, with prolonged exposure, can eventually cause respiratory-related health problems, pulmonary hemorrhage, and possibly death in people. This case was one of the first findings of toxic black mold in household pets.

But when you are unaware of harmful elements in your home, how can you keep a healthy environment for pets? Mader says to be honest with your veterinarian about the state of your home. “I think the most important thing is for clients to be aware of things in their environment that could potentially impact the health of animals.”

Veterinarians are positioned to help owners not only care for their pets but troubleshoot symptoms and get to the bottom of concerns. Pet owners should also be aware not all treatment that works on a human is considered safe for furry friends, so make sure you consult with your veterinarian before diagnosing and treating your pet at home.